Carpathian Rus’ is literally in the heart of Europe. There are even two monuments, built in 1870 and 1970, which make in far eastern Carpathian Rus’ the exact geographic center of the European continent. Carpathian Rus’ is a quintessential borderland, where geographic, political, ethnolinguistic, religious, and socio-climatic borders converge. In the midst of this fascinating diversity the main population has traditionally been comprised of Carpatho-Rusyns, who have interacted with other peoples living within their midst: Hungarians/Magyars, Slovaks, Poles, Romanians, Jews, Germans, Roma/Gypsies, and, in more modern times, Czechs, Ukrainians, and Russians.

Carpathian Rus’: A Historical Atlas provides the reader with a firm grasp of this amazingly complex space. Included are 34 chapters with full-color maps that trace in chronological order developments not only in the historic territory of Carpathian Rus’ but also in the larger surrounding area of central Europe. Accompanying each chapter is an explanatory text which provides the geographic, ethnolinguistic, cultural, and historical context of the accompanying map. Appended is a list of sources and index.

There are no reviews yet.

Be the first to review “Carpathian Rus’: A Historical Atlas” Cancel reply

This site uses Akismet to reduce spam. Learn how your comment data is processed. 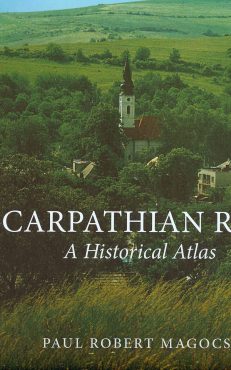 You're viewing: Carpathian Rus’: A Historical Atlas $28.00
Add to cart

Visit "News" to find out all of the details about the 2021 Carpatho-Rusyn Research Center Summer Seminar Series presented by the John and Helen Timo Foundation! Dismiss